Radix Sort is lower bound comparison based algorithm. It is a non-comparative integer sorting algorithm that sorts data with integer keys by grouping keys by individual digits which share some significant position and value. Radix sort is a linear time sorting algorithm that sort in O(n+k) time when elements are in range from 1 to k. The idea of Radix Sort is to do digit by digit sort starting from least significant digit to most significant digit. Radix sort uses counting sort as a subroutine to sort. Radix sort is generalization of bucket sort. 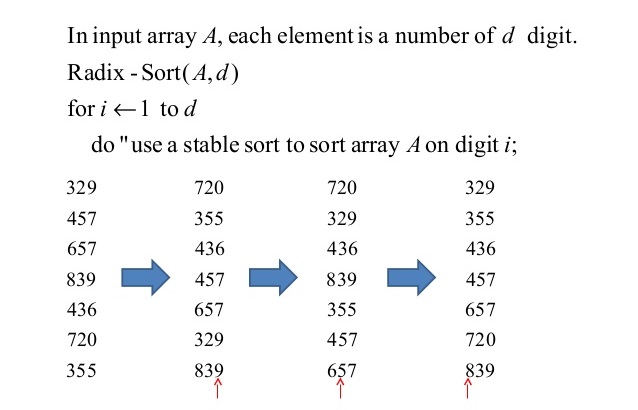 Previous Topic
Next Topic
SO Community
2016-10-07
2016-10-07
2016-12-31
http://i.stack.imgur.com/o3im8.jpg
algorithm Pedia https://algorithm.programmingpedia.net/favicon.ico
This modified text is an extract of the original Stack Overflow Documentation created by following contributors and released under CC BY-SA 3.0
This website is not affiliated with Stack Overflow
Email: tutorialpedia@outlook.com
Icon